4. Water as a heat transfer fluid

Untreated water meets the needs of most liquid-cooling applications. However, purified water has chemical and electrical properties that make it the better choice for cooling when the liquid circuit contains micro-channels or when sensitive electronics are involved. Purified water is used as a general term in this handbook to mean any type of water that has undergone some kind of purification process.

Selecting the required water quality is an important step when purchasing or operating a purified water system. Adding additional purification facilities after purchasing a system can be expensive. For this reason the selected water should be based on the application that requires the highest purity.

There are various ways of purifying water depending on the requirements of the application and hence the dissolved impurities to be removed.

Deionization is the process of removing ionized solids from water using the principles of ion exchange. All dissolved minerals in water consist of both a metallic part (a positively charged cation) and a non-metallic part (a negatively charged anion). A common way of deionizing water is to use a mixed bead system, as shown in Figure 4.1. The deionization reaction takes place as the water passes between at least two types of ion exchange resin beads. In one column (cation resin), positively charged cations are exchanged for H+ ions. In another column (anion resin), negatively charged anions are exchanged for OH- ions. The final products of these two exchanges, H+ and OH-ions, form water molecules. A softener used to produce soft water requires only one resin to accomplish its job because it exchanges only cations.

Figure 4.1 A mixed bead system consists of tiny spherical plastic beads between which the feed water passes. Ions are divided into two groups, cations and anions. Cations have a positive charge, and include sodium (Na+), calcium (Ca2+) and magnesium (Mg2+). Anions have a negative charge, and include chloride (Cl-), sulfate (SO42-) and bicarbonate (HCO3-). To exchange one Ca2+, two positively charged H+ are necessary.

Reverse osmosis is effectively the use of a water filter with very small pores. The pores in the membranes are so microscopic that molecules larger than water cannot pass through them. However, for the effective removal of ionic components, the water must be pretreated to flocculate scaling substances. Reverse osmosis is probably best used as an ultra-filtration process in combination with other purification processes.

Distillation is used to remove all the dissolved solids from water. The water is vaporized using heat or reduced pressure over the feed water, and the vapor is condensed into distilled water. Non-volatile components of the water, i.e. scale minerals, are left behind. The end product will probably still have all the volatile and most of the organic components of the feed water, and depending on the process there may still be a few traces of dissolved solids. Dissolved gases and trace contaminants will probably have a small ionic component, which affects the pH of the distilled water slightly.

Untreated water usually contains dissolved minerals and gases, including metal carbonates and halides, traces of other compounds and a few organic contaminants. Different water types are produced by using distillation, deionization, reverse osmosis or another suitable process. The process used depends on the requirements of the application.

The water hardness of a supply is determined by the content of calcium and magnesium salts. Calcium and magnesium can combine with bicarbonate, sulfate, chloride and nitrate to precipitate as solids. When water containing calcium carbonate (CaCO3) is heated, a hard scale may be formed that can obstruct pipes and coat heating elements. Mineral salts make water more basic and aggressively corrosive towards many materials. The presence of salts in lime scale deposits is one of the most common causes of corrosion, which damages water pipelines and boilers. This is discussed further in Practical Advice/Fouling.

A conversion table for different water hardness units is shown in Figure 4.2. The most frequently used standard classification expressed in German degrees is: 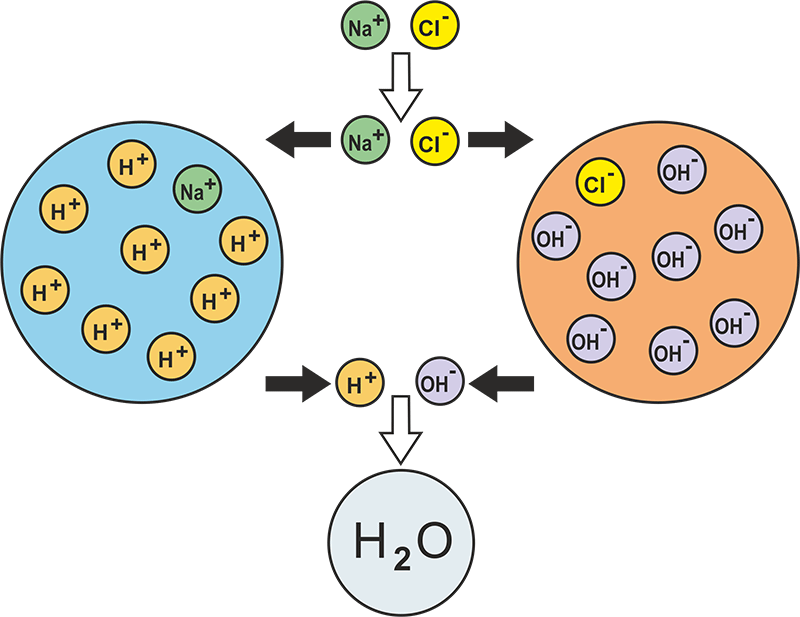 Distilled water does not contain any non-volatile components, i.e. scale minerals. However, all the volatile and most of the organic components remain after distillation.

Deionized water (DI water) has a lower concentration of ions, which leads to important performance advantages. The low concentration of ions eliminates the risk of electrical short-circuits that would otherwise damage sensitive electronics in the equipment being cooled.

Ultra-pure water is often made using a combination of purification methods, e.g. a mixed bead system after a reverse osmosis unit. These combined methods are used when water with a conductivity of less than 0.1 μS/cm is required. More information about resistivity and conductivity is available in Water as a Heat Transfer Fluid/Testing Water Quality.

Resistivity is the most convenient method for testing water quality. The amount of ionized substances (or salts) dissolved in water determines its ability to conduct electricity. Resistivity and its inverse, conductivity, are therefore good general-purpose quality parameters. Because temperature dramatically affects the conductivity of water, conductivity measurements are internationally referenced to 25 ºC to allow different samples to be compared. In typical water supplies, temperature changes the conductivity by an average of 2%/ºC, which is relatively easy to compensate. Deionized water, however, is much more challenging to measure accurately, because temperature effects can approach 10%/ºC. Accurate automatic temperature compensation is therefore the main criterion of any respectable instrument.

The pH of water is a measure of its acidity or alkalinity, and is defined as:

where [H+] is the molar concentration of hydrogen ions.

pH values are defined on a scale from 1 to 14, with ultra-pure water having, ideally, a neutral pH of 7.0.

Figure 4.3 Resistivity vs. pH of deionized water at 25 ºC

To be able to judge whether a specific water is corrosive to a metal or alloy, the water must be analyzed. Factors that may influence the corrosion process are listed below.

Stainless Steel is an iron-based alloy containing at least 10.5% chromium and maximum of 1.2% carbon. AISI 304 contains 18% chromium and 8% nickel while AISI 316 contains a minimum of 16% chromium, 10% nickel and 2% molybdenum. Chromium has a very high affinity for oxygen. This means that stainless steel, after fabrication, already has a thin passive layer that protects the surface from corrosion. The molybdenum is added to help resist corrosion by chlorides (e.g. sea water and de-icing salts). Stainless steel dissolves very slowly when exposed to purified water with low ion concentration (deionized water). However, this is an acceptable rate for stainless steel used in deionized water applications.

All-Stainless units are brazed using a stainless steel paste with properties that correspond to AISI 316 stainless steel‘s requirements. The nickel brazing material that SWEP uses is an alloy based on nickel with 15% chromium, 7% silicon and 1% boron. The alloy does not depend on a protective film being formed, and thus has a higher resistance than copper to deionized water. This is because the nickel alloy already has a passive protective layer, depending mainly on its chromium content. Like stainless steel, the nickel alloy dissolves very slowly in deionized water. However, this is an acceptable rate for use in deionized water applications.

There are different types of purified water, each more or less corrosive depending on the degree of purity. For example, ultra-pure water is more aggressive than deionized water. When designing a system that uses purified water, it is essential to specify compatible materials such as stainless steel or nickel for deionized water.

In the past, purified water was used only in limited applications. Today, it has become an essential ingredient in many applications including:

Copper-free heat exchangers, such as SWEP all-stainless BPHEs, nickel-brazed BPHEs and Minex models, are installed in various purified water systems. Electronics in general requires the use of purified water, because ions in water may lead to short-circuits in electronic equipment. Electronic systems cooled by deionized water include AC converters. An example of a non-electronic application using deionized water is the cooling of the ignition lamps and laser rods in laser systems.

In summary, purified water-cooled systems are critical to the reliable operation of many types of equipment. When properly designed and maintained, these systems can provide reliable cooling and leak-free operation.