The great majority of the fuel oil used by the world’s merchant fleet today is residual fuel oil. This is also true for the vast majority of large diesel engines operated on land.

The great majority of the fuel oil used by the world’s merchant fleet today is residual fuel oil. This is also true for the vast majority of large diesel engines operated on land.

Residual fuel oils are the products remaining from the refinery processes after all the distillates (lighter fractions) have been removed (see Oil as a Heat Transfer Fluid/From Crude Oil).

These residues are complex mixtures whose composition depends on the source of the crude oils processed and the complexity of the refinery. There are several reasons for heating the fuel before it is used. Marine vessels, for example, must start in cold weather, rescue vessels must keep standby engines ready to run at full power in case of emergency, and separation processes only operate successfully with preheated fuels.

The various grades of fuels are referred to by different names and depend on the supplier’s terminology.

Gas oil, also called LFO (light fluid oil), is used in some smaller engines and engines operated in environmentally sensitive areas. This grade of fuel is marketed under various names including gas oil, bunker gas oil and marine gas oil. It is a light distillate with a clear and bright appearance. It is a clean fuel because it does not contain any residual fuel components.

On the other hand, diesel fuel may contain a small amount of residual fuel and may be dark or black in color. It is known by various names including light diesel and marine distillate. Blended diesel oil does contain some residue and is frequently known as marine diesel oil.

Residual fuels have the highest viscosity and are thus the cheapest and most common fuel available for use in large diesel engines. Suppliers of residual fuels use various names, including the terms HFO (heavy fuel oil), bunker fuel oil and marine fuel oil.

Figure 10.1 Hot steam is used to preheat the fuel oil. The heated fuel oil may then be used directly by a combustion engine.

The use of steam requires certain components close to the BPHE that are not included in a water-heated system. The steam trap, shown in Figure 10.2, ensures that uncondensed steam and non-condensable gases, e.g. carbon dioxide and air, do not enter the condensate line. Without a steam trap these gases would occupy a lot of space in the condensate pipe, which may lead to so-called water hammer. Water hammer is a pressure surge that may damage the condensate pipe or other components. 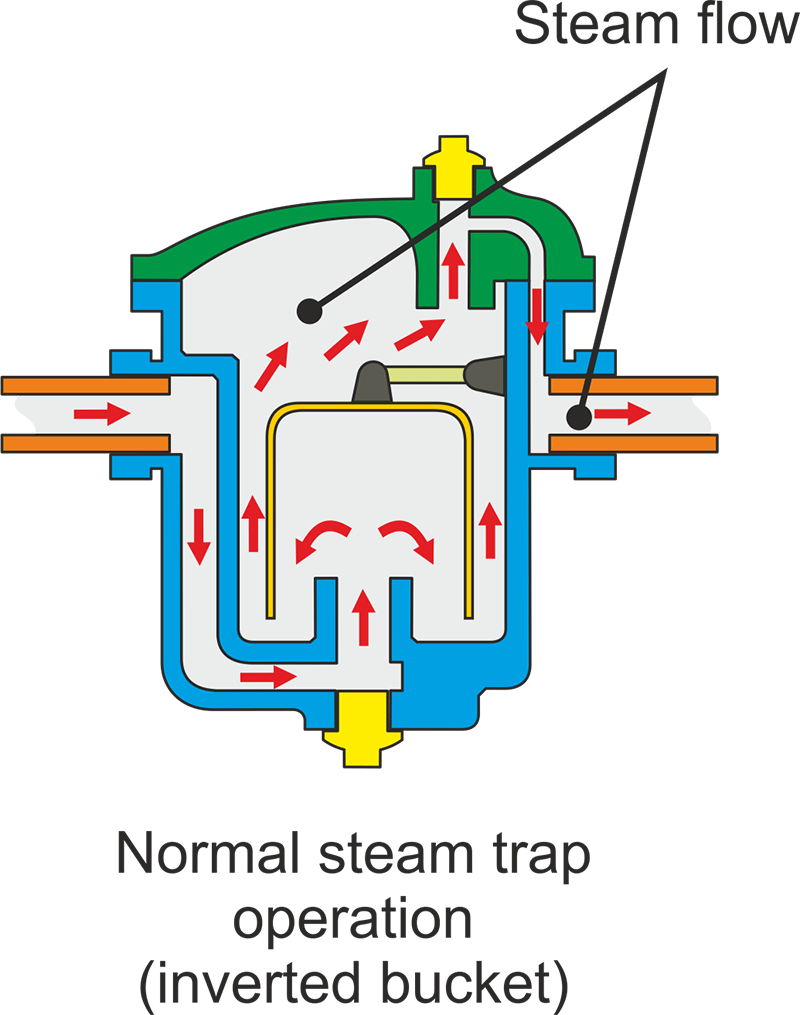 Preheating Fuel Oil for a Separator

When water gets into a fuel oil by condensing from the piping and/or storage tank, the fuel oil is not immediately usable when arriving on a ship, but must be cleaned. This is done in a separation process. Without cleaning, this contaminated fuel oil will deteriorate, and the performance of the engine will be impaired. To enable the water to be separated from the fuel oil without getting the separator full of sticky fuel oil, the fuel oil must be heated. The higher the temperature of the fuel oil, the lower its viscosity and the more effective the separation process. The heating fluid in this application is steam, and the flow chart is similar to the one shown in Figure 10.1 (in this case the oil flows into a separator after being heated). After the separation process, the cleaned fuel oil is then often mixed with specially treated water to stabilize the manufactured properties of the fuel oil. A treatment system for fuel on a marine vessel is shown in Figure 10.3. 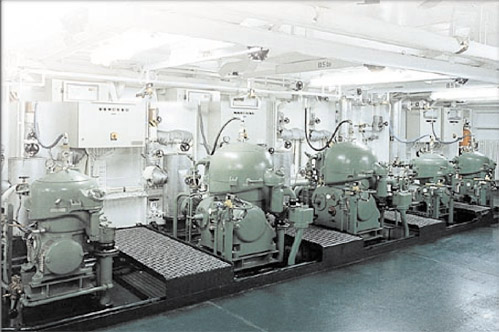 The legislation surrounding environmental safety is becoming increasingly stringent. Expenditure on cleaning the outlets from industrial plants such as chemical plants is therefore increasing considerably.

When air polluted with organic solvents is cleaned, various types of oils can be used as the absorbent. A vegetable oil is used in the principal layout shown in Figure 10.4. The organic solvents in the outlet air from the chemical plant are absorbed in oil at 15 °C in an absorber. To separate the solvents from the oil, the oil from the absorber passes through a heat exchanger unit where it is preheated to 195 °C. An electrical heating source in the stripper then increases the temperature to 200 °C in a vacuum. The solvents boil off, leaving the oil clean and ready to re-enter the absorption tower. However, before the oil re-enters the absorber, its energy is recovered in the heat exchanger unit where the hot, clean oil is cooled to 15 °C by the solvent-containing oil from the absorber.

In this case, two parallel-coupled SWEP B65H BPHEs, with the maximum number of plates, constitute one unit. Two or more units in series can then be used to achieve the required temperature difference (dT) between the oil flows. In this example, where dT = 5K, two units in series were used, as shown in Figure 10.5. 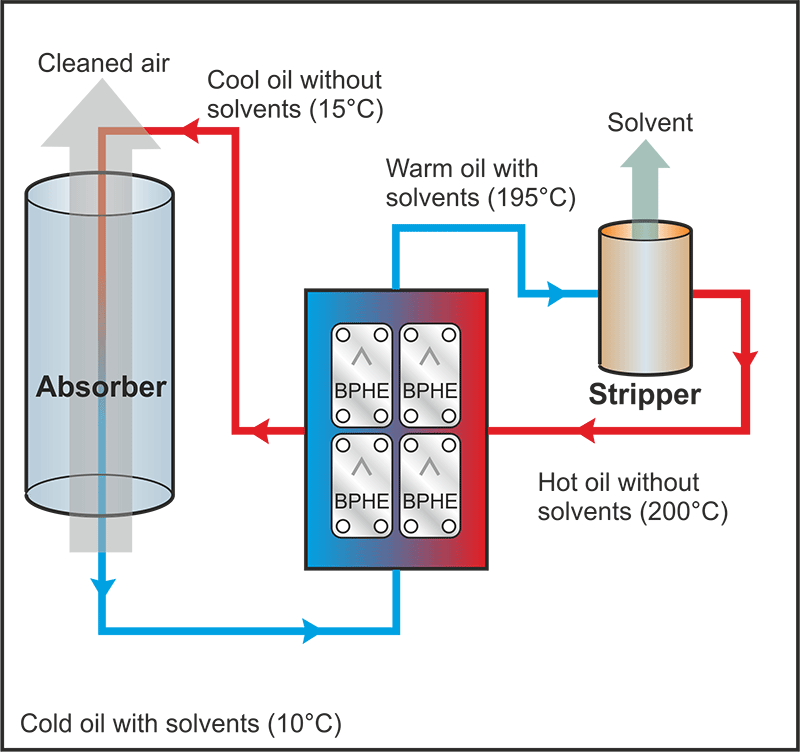 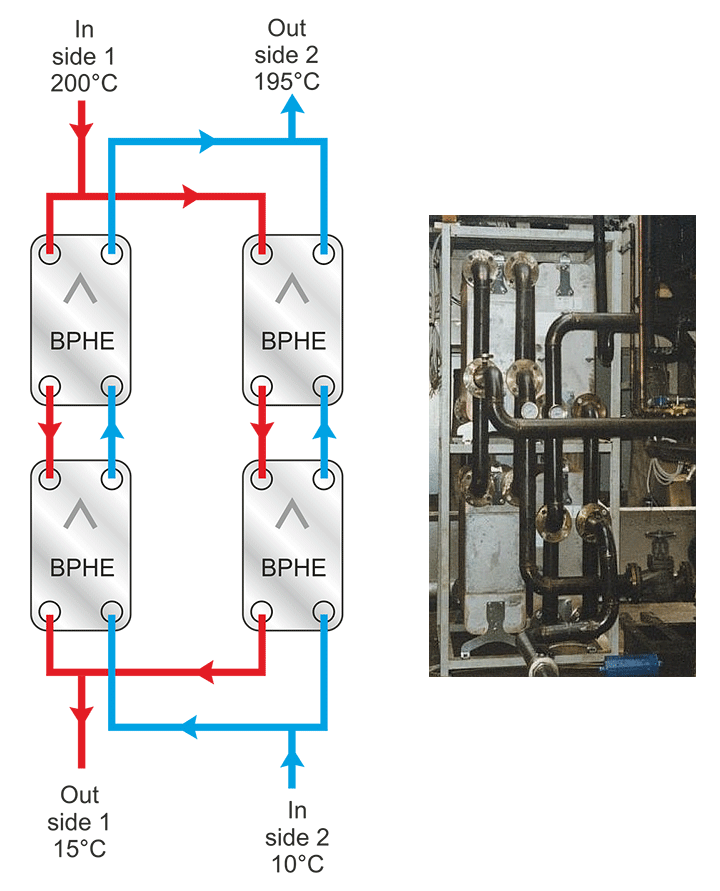