The Rankine cycle is used in conventional steam turbine powerplants all over the world.

The boiler usually consists of three heat exchanging elements such as a preheater, evaporator and superheater, in which the subcooled feed water absorbs heat from a heat source to form superheated steam at high pressure. The superheated steam will then expand in a turbine working towards the low backpressure at the condenser. The low pressure steam will then be condensed and pumped to the boiler by the feed water pump.

Water has some advantages to other fluids and the most important one is probably its abundancy. A drawback with water is that it requires high temperatures in order to evaporate. Also, steam is a wet fluid meaning that the saturation curve has a negative slope on the vapor side, this implicates that the fluid needs to be superheated to make sure that steam does not condensate in the turbine during expansion.

Organic fluids or refrigerants can contrary to steam be dry or isentropic fluids. These do not have negative slopes but vertical and positive, this indicates that the fluid can be expanded without risk of condensation in the turbine. Dry fluids will as a fact even get superheated during isentropic expansion. These fluids also tend to have lower boiling points than water meaning that refrigerants can provide both a low evaporation temperature and a large expansion, meaning that they could give good performance for low temperature systems.  Which is the principle behind ORC.

The organic fluid or refrigerant allows the ORC to recover heat from lower temperature sources such as industrial waste heat, geothermal heat, solar ponds etc. The fluid is vaporized and expanded just as in the case for steam.

ORCs are often manufactured as modules and brazed plate heat exchangers are helping in providing compact and cost efficient solutions. SWEP BPHEs have successfully been used for all heat exchanger elements in ORCs.

The subcooled refrigerant/organic substance needs to be preheated to the saturation point prior to evaporation. A preheater can be installed as a standalone BPHE or be included in the design of the evaporator, if the inlet is subcooled in the evaporator SWEP recommends using B-type BPHEs. The combined preheater/evaporator should not be used where steam is heat source or for applications with high temperature difference (>100K). For that kind of applications, preheater and evaporator must be split in two heat exchangers to reduce thermal stress.

In comparison to HVAC applications the condensation in ORC systems is at low pressure. Lower pressure yields a higher volume flow and the port size of a small BPHE can be a limiting factor for ORC condensers. SWEP recommends using B-type BPHE with large ports and, if available, L-plates for low pressure drop.

The cycle efficiency can be increased by using a recuperator. The recuperator is installed as gas cooler/liquid heater between the condenser inlet and after the pump. The power required from the heat source is therefore reduced and the efficiency is increased. For R245fa, a recuperator is normally used only for evaporating temperatures above 120°C. For lower evaporating temperature the impact of the additional pressure drop is often greater than the benefits of the recuperator. It is often suitable to have a recuperator for dry fluids (it gets superheated during expansion) to recover the sensible heat before condensation. 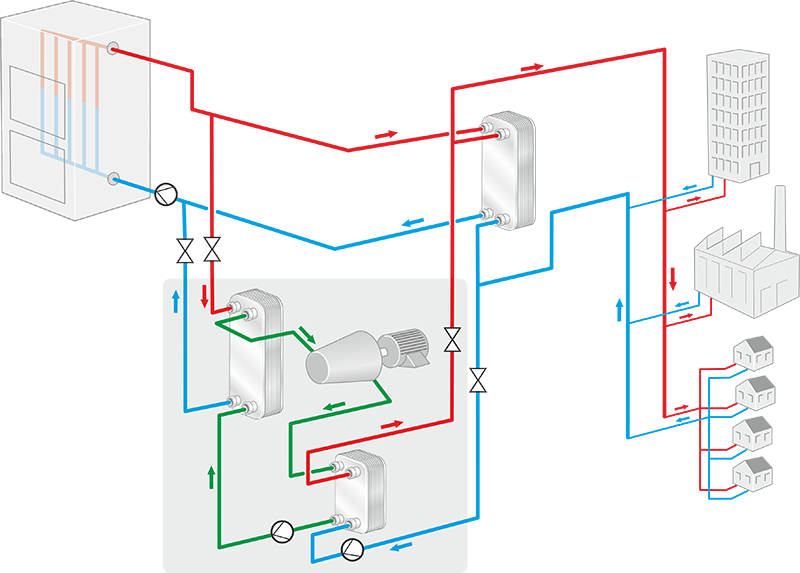