In addition to the basic equipment in a direct expansion refrigeration circuit, i.e. evaporator, compressor, condenser and expansion valve, the flooded system needs a receiver (no. 1, Figure 6.44) to separate the twophase mixture after the expansion valve (no. 5). The refrigerant leaving the bottom of the receiver is 100% liquid.

A forced-flow flooded system is identical to a thermosiphon system, except that a pump is installed before the evaporator to serve as a driving force for the refrigerant (see Figure 6.45, no. 6).

If the installation site does not offer the minimum necessary height difference between the receiver and evaporator to allow density circulation, a forced-flow system may be preferable over a thermosiphon. The higher cost of a pump can still be more economical than elevating the roof of the installation room. Forced-flow systems often have a larger circulation number than thermosiphon systems due to the higher mass flow created by the pump.

Larger static head, i.e. a larger height difference between receiver and evaporator, increases the sub-cooling of the refrigerant. The preheating in the beginning of the evaporator is then increased, which may lead to the requirement of a larger evaporator, because much more heat transfer area is needed to preheat liquid instead of producing gas.

The receiver separates the refrigerant vapor before feeding it to the compressor (see Figure 6.46), so there is no need for superheating the refrigerant in a flooded evaporator. A larger portion of the total heat surface area will thus be used for evaporation compared with a DX evaporator, where 10-30% of the total heat surface area may be dedicated to superheating.

Figure 6.46 compares a flooded system and a DX system. The greenline detour (b-c) to the liquid saturation line (bubble line) shows the phase separation in the flooded system receiver. Because of the pressure gain (c-d) in the pipe that connects the receiver and the flooded evaporator, the evaporator inlet liquid is sub-cooled. Please note that the (c-d) line in Figure 6.46 is exaggerated. The pressure gain in the receiver-evaporator pipe is actually approximately 5-50 kPa (0.05-0.5 bar), while the pressure lift over the compressor is roughly 12-17 bar. Because there is no need for superheating in a flooded evaporator, the evaporation temperature can be a few degrees higher than in a DX evaporator (see Figure 6.47).

Due to the higher evaporation temperature in a flooded evaporator, the pressure lift between the evaporator and condenser sides is smaller. The advantage is that less compressor work (W) is needed. Perhaps the largest advantage of flooded evaporators is that they use all the latent energy of the refrigerant in the phase transition between liquid and gas to cool a fluid. This is shown in Figure 6.46, where line (d-e) stretches over the whole transition length, while the red line (g-h) does not utilize the entire phase transition length. In other words, the COP (coefficient of performance) is higher for a flooded system.

The restraining forces in the two-phase connection are more complicated to estimate, because the outlet flow from the evaporator is in two phases. The evaporator pressure drop is given in SSP. Table 6.2 is a receiver height converter for different refrigerants. The heights are calculated using the same formula as for the driving force.

Table 6.2 Examples of how the height between the receiver and evaporator varies with the static head pressure.

Refrigerants with a large glide are not recommended for flooded evaporators. The refrigerant is not fully vaporized in a flooded evaporator, and the composition would consequently change for a refrigerant with glide. This would make it difficult to evaluate temperature changes throughout the system.

When are Flooded Systems Used? The advantages and disadvantages of flooded systems are shown in Table 6.3. Flooded systems are economic for large refrigerant systems, due to the lower requirements on power input to the compressor. For smaller systems, the pay-back time for the larger installation cost of a flooded-flow system is often considered to be too long despite the smaller power input. 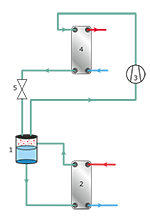 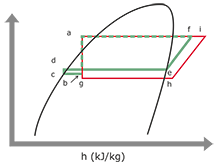 Figure 6.48 The balance of forces over a thermosiphon evaporator.