Heat exchangers and refrigerants with glide

For refrigerants with glide, e.g. R407C, it has been indicated that a substantial sub-cooling is required to receive pure liquid from the condenser. Thus, if the condenser is operating with co-current flow, an increased condensing temperature could be the result.

During the evaporation and condensation of zeotropics, there is a negative effect on the heat transfer coefficient due to mass transport phenomena in the refrigerant. High turbulence and good mixing in the heat exchanger neutralizes this negative effect, which also suggests that BPHEs have an advantage over S&Ts.

Another problem with zeotropics can occur if refrigerant liquid is allowed to collect somewhere in the circuit, e.g. in suction line accumulators, flash tanks, receivers or pool boiling/flooded evaporators (often S&T). A change in the composition of the refrigerant circulating through the system could follow from this, resulting in unpredictable performance. To avoid this, all components should have a continuous flow of refrigerant without the opportunity to collect any liquid. Hence, flooded evaporators will probably disappear from systems containing mixtures with glide.

A considerable leak of refrigerant in the liquid-vapor region can lead to the same problems, i.e. changed composition of the remaining refrigerant charge, giving unpredictable system performance. 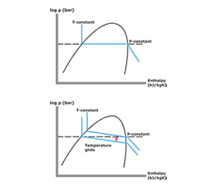